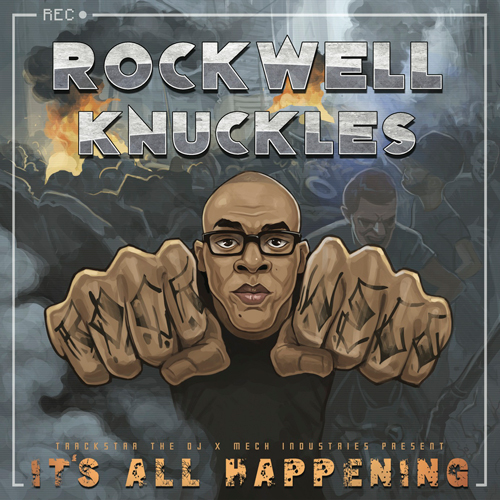 St. Louis’s Rockwell Knuckles raps like a superhero telling his nemesis his evil plan will never work, like he is 100 feet tall and he is here to project your city. When he doubles his voice every line might as well be “Autobots …. transform!” And then he sings the hook.

Yet as huge as Rocky’s It’s All Happening is, it’s also full of calming soul and generally chill backyard barbecue vibes, particularly on songs like “Just Livin,” featuring frequent collaborator Tef Poe, and the funky interlude of “Orange Glow.” From Breaking Bad-referencing shit-talking to smooth, soul-sampling nostalgia, It’s All Happening is a rich, varied project well worth your time.

Rockwell Knuckles was last seen around these parts in Tef Poe’s “Hog In The Lane” video whippin a riding mower down the block. But you may have also heard his name recently thanks to the Ferguson activism work around St. Louis by Rocky and his Footklan collective, who Killer Mike shouted out in a recent interview with Noisey, or because he and Tef, as The David Ruffin Theory, just got off a run through the Midwest opening for Run the Jewels in November.