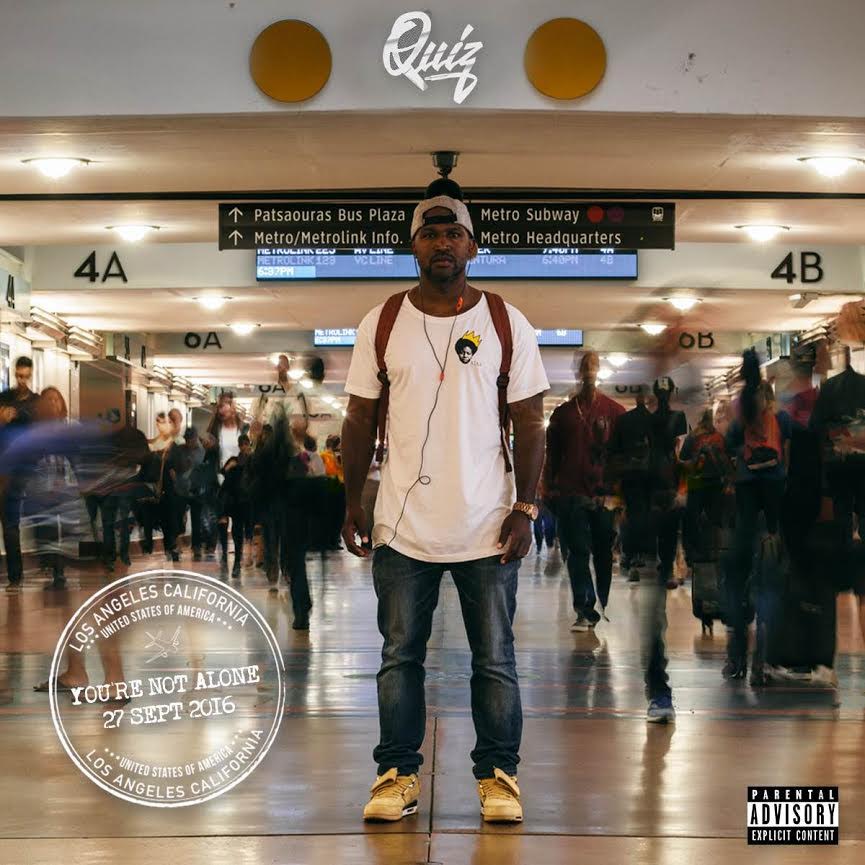 Truer words have never been spoken. Quiz’s latest project “You’re Not Alone” is good. So good in fact, that I was compelled to go through his catalog and take a listen to everything of his that I could find. Back in 2010 the Moreno Valley born emcee was approached by Glasses Malone and invited out to perform for his “Independent Grind Tour”, which featured the likes of Tech Nine, E40, Jay Rock and Kendrick Lamar.

In 2013 Quiz released “Dope Kicks Fresh Hats” establishing himself as a strong contender in the Rap Arena. The project made its rounds and generated quite the bit of buzz for the emcee. Last year he blessed us with his “Air Max 90s” album and has been nothing but consistent in his dedication to the game and work ethic. Quiz doesn’t fail to bring the same level of love and passion into his latest offering, “You’re Not Alone”. He cares about the state and condition of Hip Hop and tells you all about it while performing lyrical back flips and making it all look a little too easy.

Quiz has a very polished approached on this record. Production was handled exclusively by Southern California stable “The Teamsterz“. The combination of lyrical excellence and next generation “boom-bap” inspired west coast production allows this project to smoothly roll from one song to the next. Stand outs tracks include “Win Like” , which is very reminiscent of the best of Kanye’s early days, production on this track is very nostalgic and perfectly sets the tone for the attitude and perspective of the rest of the album. Next I have to shout out “Separation”, as it’s a personal favorite, Brooke Jean carefully cradles and delivers a powerfully positive and motivational hook that speaks directly to my current mood and mindset.

Purchase “You’re Not Alone” on iTunes and other digital platforms.

Listen to the album here: